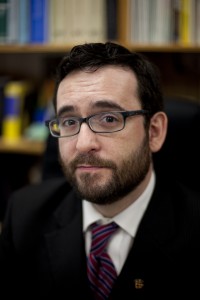 Gideon was raised by Harriet S. Bougen and Lewis B. Oliver, Jr., two lawyers who practiced together as Oliver & Oliver in Albany, New York.

For nearly three decades, the slogan of Oliver & Oliver was: “You can fight City Hall and win!”

Gideon graduated from the Albany Academy for Boys – an all-male, military high school – in 1992.

He received a B.A. in Philosophy with a Correlate in Women’s Studies from Vassar College in 1997.

He graduated from Brooklyn Law School, where he was a Richardson Scholar and a Sparer Public Interest Fellow, in 2003.

In 2008 and 2009, Gideon worked as an Associate in the Law Office of Elizabeth M. Fink, along with Sarah Kunstler.

Since 2009, Gideon has been operating GideonLaw as a solo practitioner. In that practice, Gideon acts Of Counsel to the Law Office of Elizabeth M. Fink and to Robert J. Boyle, sometimes acts Of Counsel to Lewis B. Oliver, Jr., and frequently partners with other attorneys and firms including Daniel Meyers, Martin R. Stolar, Rose Weber, Jeffrey Fogel, and Rankin & Taylor in federal and state civil and criminal litigation.